The Disney Mouse that Roared and Won! 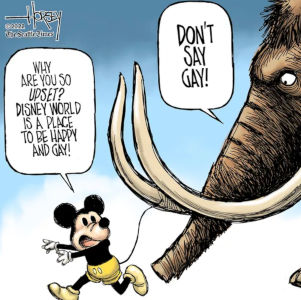 Since April the Florida Governor and the world's most famous mouse have been duking it out over freedom of speech about being gay in the Sunshine State. The Governor pushed through a bill that made it illegal to say gay in public school and by inference, anywhere else. The largest industry doing business in that state said no, no, and no to such silliness. The Governor then got his law makers to remove a tax initiative agreement from the company that hired more people and brought in more tourists in than any company in Florida, Disney World.

WTF is wrong with some conservative politicians living in a country where 70% of the country are pro gay marriage and about 17 million people are gay? Why would a state take financial sanctions against the most money making industrious in its state? It seems not only over vindictive, but financially stupid.

Then dawned the financial reality, namely the most famous mouse in Christendom was providng, not only thousands of jobs and income to the citizens but also providing municipal services (police, fire protection etc) to several counties, services valued over one billion dollars that the state would have to assume.

As often is the case when it comes to paying a billion dollars for one's "moral convictions," the governor and his lawmen tipped their hats to the mouse and withdrew their crazy law allowing Disney World, but not their public schools, to be pro gay.

Unlike a few decades ago, we live in an era where information can travel across the world in seconds. Politicians around the world are now using social media platforms to get their messages out. Some of that information is unfiltered and damaging. This week we would like to know whether you keep up with politics today. If so, how "into it" are you?

Read through the answers and choose the one that best describes you.