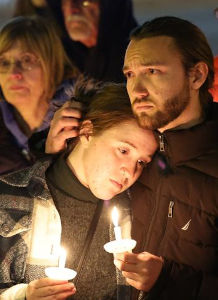 The Colorado gun killing spree in a gay bar Saturday night reminds everyone straight and gay that neither political leaders nor clergymen have been able with civil or moral teachings to stop mass shootings in what some people still keep calling this a Christian American with all evidence to the contrary.

Whether there is significance in the fact that Colorado Springs is one the more dense populated location of radical right wing religion, I can not say, but as long as clergymen in high place continue to preach that gay people are damned to a mythical place of torment, there will be weak minded individuals who will take steps to send people to their non existent hell.

Extremist clergymen lean on the US Constitution for freedom to express antiquated views that intelligent people have long since dismissed as out dated myths. Freedom of speech does not grant anyone the freedom to say things that will get people killed. One cannot yell fire in a crowd when there is no fire, and neither should any clergymen, no matter high his position, get by with yelling about the fires of hell that are only in his mind.

We need to find how to stop the shooting of both deadly guns and deadly mouths.