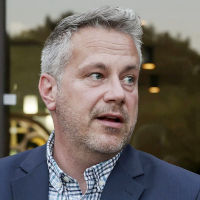 NBC NEWS: For the first time in US history, Americans from all 50 states and the District of Columbia will have a chance to elect an LGBTQ person to public office.

A new report by the political action committee LGBTQ Victory Fund found that of the 1,065 LGBTQ candidates who ran primary campaigns, a historic 678 of them (the vast majority of which are Democrats) will appear on the ballot in November, an 18.1% increase from the 2020 general election. (At Left: Eric Sorensen running U.S. House of Representatives, Illinois' 17th Congressional District)

The record-breaking election year comes as a historic number of anti-LGBTQ laws have been introduced in state legislatures throughout the country and as homophobic tropes have resurfaced in the nation's mainstream political discourse. (For the full article, Click Here.)