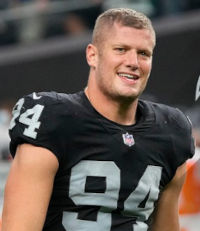 Nassib, then of the Las Vegas Raiders, came out a little more than a year ago and made one of the NFL's most memorable early season plays, sacking the Baltimore Ravens' Lamar Jackson and forcing a fumble in a dramatic Monday Night Football victory for the Silver & Black.

Ron: Florida does not want people to say gay, but they don't mind if gay sportsmen play. I thought this would be interesting to sports fans and to all as it shows the continued progress of gay people in all levels of society in spite of opposition from the far right political and religious conservatives.