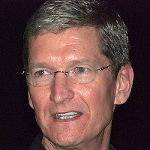 Florida lawmakers recently passed a Republican-backed bill prohibiting classroom discussion of sexual orientation and gender identity for many young students. The legislation has stirred national controversy amid an increasingly partisan debate over what schools should teach children about race and gender.

"As a proud member of the LGBTQ+ community, I am deeply concerned about laws being enacted across the country, particularly those focused on our vulnerable youth,' Cook said on Twitter.

Walt Disney CEO Bob Chapek is another chief executive to voice his disappointment about the LGBTQ legislation. (To read more, Click Here.}