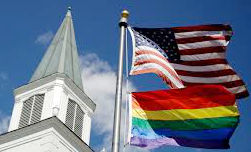 Conservative leaders within the United Methodist Church unveiled plans to form a new denomination, the Global Methodist Church, with a doctrine that does not recognize same-sex marriage.

The move could hasten the long-expected breakup of the UMC over differing approaches to LGBTQ inclusion. For now, the UMC is the largest mainline Protestant church in the U.S. and second only to the Southern Baptist Convention, an evangelical denomination, among all U.S. Protestant churches.

Due to the coronavirus pandemic, the UM's General Conference (at which the schism would be debated) has been postponed for two consecutive years, and is now scheduled to take place in Minneapolis starting in late August of 2022. (Read more by Clicking Here.)