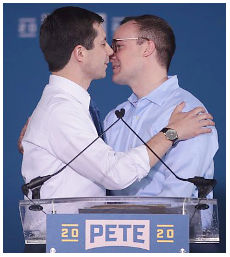 (From NBC News:) At least 843 LGBTQ people currently serve in elected offices across the United States, constituting a 21 percent increase since June 2019, according to the LGBTQ Victory Institute's "Out for America 2020" census of lesbian, gay, bisexual, transgender and queer elected officials.

(At Left: Pete Buttigieg. Although he dropped our of the race, who would ever have thought twenty years ago a gay man, married to a man, would be able to run for US President?)

Much of this increase was driven by what Victory called a "rainbow wave," a surge in LGBTQ wins in the 2018 and 2019 elections. Victory hopes that 2020 will usher even more LGBTQ people into elected office. (For the complete article, Click Here.)