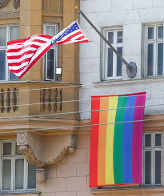 MOSCOW - President Vladimir Putin on Friday mocked the U.S. Embassy in Moscow for flying a rainbow flag to celebrate LGBTQ rights, suggesting it reflected the sexual orientation of its staff.

His comments followed a nationwide vote on constitutional reforms that included an amendment enshrining the definition of marriage specifically as a union between a man and a woman.

Putin said the U.S. Embassy's move to raise the pride flag "revealed something about the people that work there."

"It's no big deal though. We have spoken about this many times, and our position is clear," said Putin, who has sought to distance Russia from liberal Western values and aligned himself with the Russian Orthodox Church.