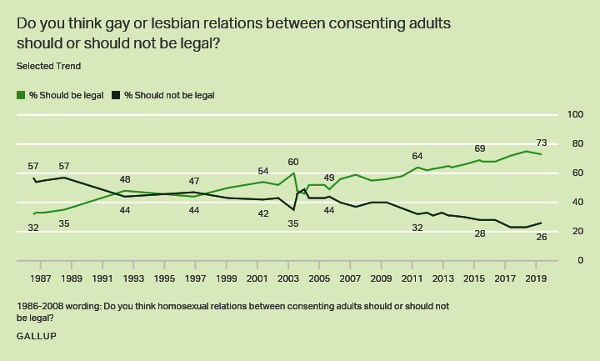 With all the anti gay cant from the conservative media and millionaire (dare I say fake?) evangelists these days, we can remind ourselves and take comfort in the continuing growth of support for gay civil rights including marriage among the vast majority of Americans.

In the above graph of a history of Gallop Poll's inquiry about gay rights, we see a movement of gay support of only 32% in 1987 to 73% last year. In the same time period those against gay rights went from 67% to current 26%. Nearly three Americans in four support gay rights and gay marriage while many powerful politicians and conservative religions continue to act as if they were in the majority. By all rights the gay controversy is over and dead in the USA. It only lives in the minds of the delusional and those who have a vested interest getting money or votes by supporting a lost cause.

The tipping point came in 2003-2004 when the pros outnumbered the cons. What caused this? I suspect it happened when Massachusetts became the first state to legalize same sex marriage. Other enlightened states followed with friendly laws toward gay people, and gay people started getting married by the thousands, the sky did not fall, Biblical plagues failed to appear, the sun continued to rise, and smart people went on to more important issues. Within two years of the US Supreme Court's ruling in 2015 legalizing gay marriage, over a million gay people had married.

Whenever you hear the hateful remarks, take comfort that they come from a lost cause that is gone with the wind, never to return.