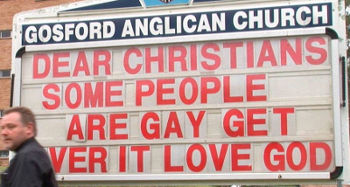 The Guardian Melbourne's Anglican church has formally voted to record its "sorrow" over a regional Victorian diocese's decision to bless same-sex marriages.

The nod of approval given by the Wangaratta diocese in August has angered the Melbourne church's governing body.

But the Melbourne vote of condemnation wasn't unanimous, with some members of the governing body, known as a synod, praising the Wangaratta diocese's choice to "show love".

"If people wish to change the doctrine of our church, they should start a new church or join a church more aligned to their views,but do not ruin the Anglican church by abandoning the plain teaching of scripture," Davies said in an address to the 51st Synod of the Diocese of Sydney on Tuesday. "Please leave us." (To read the full article, Click Here.