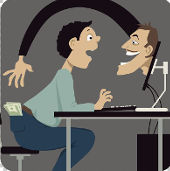 From Ron: I can't believe that evil people are still sending out such crappy spams, but you are right in thinking they will worry some people. How to deal with Spam and Scams: Find your Delete Key and use is often. While I admire the big balls of the above Apollo Man, it's best not to reply as it confirms your email. There is a special place in Dante's Hell for these people. Let's hope they are caught and made to suffer first in this life time.