News
US Supreme Court: Can Someone Be Fired for Being Gay?
Posted by: Ron @ Tuesday, September 24th 2019 @ 10:12:59 AM EST
NOTE from RON: I'll be visiting family over the weekend and will log onto Apollo daily. If you need or want to get in touch, go to my profile and write me using the Apollo Mail on the site. Be back soon. 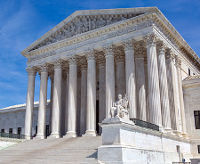 NYT: "The Supreme Court has delivered a remarkable series of victories to the gay rights movement over the last two decades, culminating in a ruling that established a constitutional right to same-sex marriage. But in more than half the states, someone can still be fired for being gay.

"Early in its new term, on Oct. 8, the court will consider whether an existing federal law, Title VII of the Civil Rights Act of 1964, guarantees nationwide protection from workplace discrimination to gay and transgender people, even in states that offer no protections right now.

"It will be the court's first case on L.G.B.T. rights since the retirement last year of Justice Anthony M. Kennedy, who wrote the majority opinions in all four of the court's major gay rights decisions. And without Justice Kennedy, who joined four liberals in the 5-to-4 ruling in the marriage case, the workers who sued their employers in the three cases before the court may face an uphill fight." (To read the complete article, Click Here.)