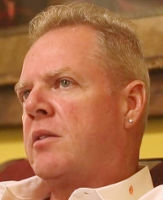 (Ron: This really isn't news in that most intelligent people have known for some time that trying to "cure" gay people is wrong, stupid, self serving, medically impossible, and and based on antiquated religious fantasies. Nevertheless, it's another brick taken from a wall built by pricks.)

From the Washington Post: McKrae Game wants people to know that he was wrong about all of it. (See picture at left)

He was wrong to found Hope for Wholeness Network, a faith-based conversion therapy program that seeks to rid people of their LGBTQ identities. He was wrong to create a slogan promoting the idea of "freedom from homosexuality through Jesus Christ." He was wrong to tell people they were doomed for all eternity if they didn't change their ways.

After 20 years working in that field, Game said he realizes the harm he has caused and that he, himself, is gay. Conversion therapy encompasses a widely discredited range of methods that purport to change someone's sexual orientation or gender identity. The practice is illegal in 18 states and the District.

"It's all in my past, but many, way TOO MANY continue believing that there is something wrong with themselves and wrong with people that choose to live their lives honestly and open as gay, lesbian, trans, etc.," Game, 51, wrote on Facebook last week. "The very harmful cycle of self shame and condemnation has to stop." To read the entire article, Click Here.