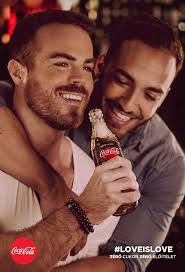 New York (CNN Business) "Coca-Cola is running ads in Hungary that include images of same-sex couples kissing and holding bottles of Coke. Now the company faces backlash from Hungarian politicians and conservative activists. But Coca-Cola has no plans to backtrack.

At least one leading politician from Hungary's ruling Fidesz party and conservative media outlets have called for boycotting Coke products or banning the company's "Love is Love" ad series.

A Coca-cola spokesman responded: "The Coca-Cola Company strives for diversity, inclusion and equality in our business, and we support these rights in society as well. As a long-standing supporter of the LGBTQI community, we believe everyone has the right to love the person they choose. The campaign currently running in Hungary reflects these values."

Coke launched the "Love is Love" campaign in Hungary days ahead of the progressive Sziget festival, which is scheduled to kick off in Budapest this week. The posters contain slogans, such as, "Zero Sugar, Zero Prejudice."

Ron: It must be those words "Love is love" that get people riled. Well, at least upset by the people who believe you must love the people who are the same color, the same religion, politics, or natural origin. I continue to be amazed that the people who quote: "God so loved the world..." cannot seem to love the world's people themselves.