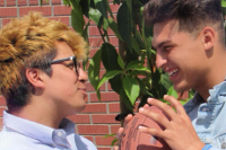 No doubt the future of full gay rights and respect lies with young people. In other times a gay student would have had to hide his feelings, but now he has the respect and nerve to express them. Here's the story (with film) of a gay guy asking his straight friend and football captain for a date to Homecoming:

Alexander Duarte, of Valley High School in Santa Ana, California, had long since come out of the closet to his classmates, including his best friend Erick Pineda. And with Homecoming coinciding with National Coming Out Day, Duarte chose to ask Pineda, captain of the Valley High football team, to go as his date to the Homecoming Dance. (At Left: Alexander Duarte and friend Erick Pineda)

As strains of Christina Perri's "A Thousand Years" played in the background, Duarte staged a full-on production to ask Pineda to the dance. During their lunch hour, Duarte arranged to have Pineda walk down a long corridor full of their fellow students toward a homemade rainbow banner, which read "I know I'm GAY, but can I take you STRAIGHT 2 HOMECOMING?" Duarte then emerged from behind another banner of a painted closet to ask the big question. (For more details and to see the film clip, Click Here.)