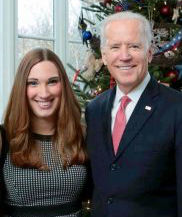 McBride defeated Joseph McCole on Tuesday to advance to the November general election. Democrats outnumber Republicans in the district by more than 3-to-1, and McBride is the heavy favorite against Republican Steve Washington in November.

McBride, who interned at the White House during President Barack Obama's administration, made history at the 2016 Democratic National Convention by becoming the first transgender person to speak at a major party convention.

If elected, McBride would join a handful of other transgender legislators around the country but would be the first transgender state senator.